During our investigations we weighed the students lunch portions. How much they took, ate and what became waste. We also did a survey everyday about the food. How they liked it, or if they chose not to eat at school and why.

We did this the first time during a normal school week to set a base line. And then again when the students had had the option of pre-ordering their lunch.

Results from phase one in our investigation

During the normal week we found that an average portion weighed 862g. Out of that 806,4g were consumed during lunch leaving 55,6g to waste. 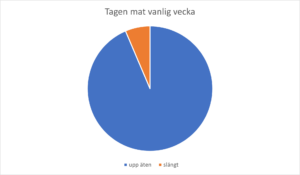 The survey that was done during the normal week showed that the food as an average was rated as ok by most students. And that a few students chose to skip lunch the first two days.

Day one during the normal week

Day two of the normal week

The digital servey for day three was never done, but we did ask the class and they all ate and liked the food that day. They rated it as a 5, on the 1-5 scale.

Results from our investigation, when the food was pre-ordered

During the week with pre-ordered food we found that an average portion weighed 990g. Out of that 962g were consumed during lunch leaving 28g to waste. 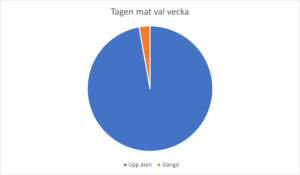 This time the food was also rated as ok in the surveys. The last day only had soup options and that wasn’t as popular with the students. Only two students skipped lunch on one occasion during this part of the investigation.

Day one with pre-order lunch

We could see that even though the portions were slightly larger during the pre-order week the waste was still almost half the amount from the normal week.

From the survey we could see that this change was not clearly connected to the food ratings since the ratings average was similar both weeks.

We have found that the result of our investigation is supporting our idea for an app.